April Winding Down, May Preview 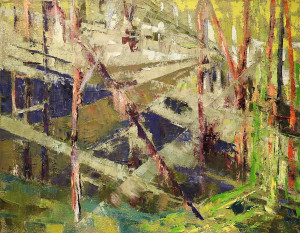 I promised that I would post an image of the new painting on exhibit at State of the Art Gallery. I have been tangled up in one thing after  another for a while, some not so funny like multiple house calls by plumbers, roofers, and garage door technicians, and some really good adventures with the Cornell Spring Ornithology lectures and field trips, but finally, at long last, here it is. It started with the intention of painting the poison ivy vines, blazing red in their fall colors climbing the cotton wood trees just past the Treman Marina, and wound up being more about the weather on a brilliantly sunny, violently windy day. It was the last good painting day in October, 2015. It became a very abstracted landscape. This will be available until May 1, 20116

Today I took down my paintings that were hanging in Transformations Hair and Skin Salon. It was a very pleasant place to show work. I signed up to exhibit there again in the future.

I still have work up in the Community School of Music and Art Gallery show, A Sense of Place. The show will come down on May 13.

Here is a preview of work that I will be showing at the State of the Art in the May Member’s Show. It is Ibis Diptych, two 20″ square canvasses that were started as separate images, but seemed to want to go together. I started it in March, 2014, and it took quite a long time to finish, in fits and starts. I was able to start it right away, after my first trip to Key West, and my first sight of white ibis. It was clear, after I established the composition, that I needed to learn a lot more about the birds. Two more trips to Florida, with lots of observation and sketching gave me what I needed to carry them on to completion. There is one more 20″ square group of Ibis, that can be shown in May, but I will tease you with just this much of a preview for now.

Permanent link to this article: http://ozolins.com/april-winding-may-preview/

What’s up for April

I have a new painting on exhibit in the State of the Art Gallery Salon for the month of April. It is the last plain air painting from Fall 2014: The Cottonwood Grove – 14×18, oil on stretched canvas. October 1 that year was warm and sunny, an unexpected last gift of summer. I grabbed up my painting equipment and went down through Cass Park, past the Marina, to the first grove of trees in the wetlands. My goal was to paint the red poison Ivy leaves climbing the cotton woods contrasting with their green leaves. Sunlight slanted through the trunks, as the sun was already getting low in the fall sky. There was an incredible wind blowing that made me steady the easel with one hand and paint with the other. My goal was to get all that wild END_OF_DOCUMENT_TOKEN_TO_BE_REPLACED

Permanent link to this article: http://ozolins.com/whats-up-for-april/

My painting, River of Time, which responded to the poem of that name, is composed of 5 stretched canvas panels. In my previous post, I posted individual or paired images of the whole. Fortunately a fellow gallery member, Jan Kather took one very wide angle shot of this, which I am pleased to post here. END_OF_DOCUMENT_TOKEN_TO_BE_REPLACED

Permanent link to this article: http://ozolins.com/river-of-time/

This is a good time to step back and reflect on my painting for the year 2015. The creative process depends on an interplay of action and reflection, and last year was definitely an time of action. Suffice to say, quite a lot of painting got done – I continued painting bucolic landscapes en pleine air, worked on two series of city and townscapes , and also experimented with color in an abstract way.

As January  opened, I was continuing the series of French street scenes that I started in 2014 after a trip to Paris, St. Dionisy, and Montpelier. Architectural perspective was quite a stretch for me after the softer shapes of foliage and hills. I chose to use a brush, and a thinner application of paint than my usual palette knife empasto. 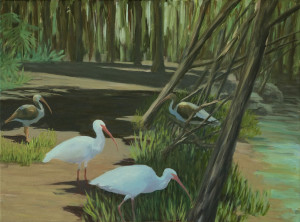 It was a harsh winter, so my husband and I spent almost two months in warmer places – first Florida, and later, Louisianna. We stayed with a  friend in Sarasota, behind which was an ecosystem filled with all manner of wading birds, ducks, raptor, and song birds. I rose at sunrise every morning and did 12×16” acrylic on paper studies of the sun coming up over the Savannah, and studied the birds, sketching and photographing. I returned to Ithaca feeling like I understood more about bird anatomy, and was better equipped to resumed work on the four 20X20 and 18×24 paintings of white ibis groupings that I started the spring before, after a trip to the Florida keys, where I saw ibis for the first time. I completed the first of them, which contained both adult and juvenile birds foraging on the bank of a pond.

At the end of April we were on the move again, this time to Breau Bridge, Louisiana, in the END_OF_DOCUMENT_TOKEN_TO_BE_REPLACED

Permanent link to this article: http://ozolins.com/2015-year-in-review/ 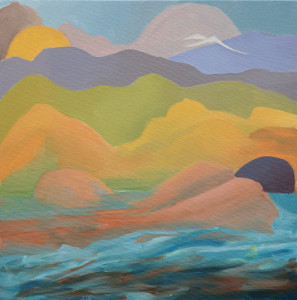 For the first two months of 2016, artists at the State of the Art Gallery will be showing works made in response to poetry. Sixteen poets were invited by Tish Pearlman, poet laureate of Tompkins County 2013-14, to present their poems to the artists, half of whom will show each month.  I will be part of the first half of the members showing in January. This show runs from January 6-31, 2016. Reception on January 8, 5-8 PM. Poetry readings by the poets Sunday January 17 at 2 PM.

My paintings, in a series of 5 panels, is a response to “River of Time,” a poem using metaphors of landscape and season. Michael Jennings describes a moment in the fullness of love, mature and deep, and wistfully recalls the innocent but passionate promise of spring. Winter is never mentioned, but by its very absence, declares its presence looming. The seasons — and ourselves — change slowly, subtly, and mostly unnoticed until we realize that “No one comes back. No one steps twice in the same body.” These panels represent the continuum of time with its colors morphing from the fresh pastels of spring, through the golds of August, into the stark midnight blues and silvers of winter and old age and death. 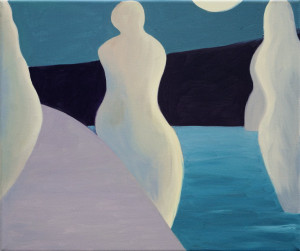 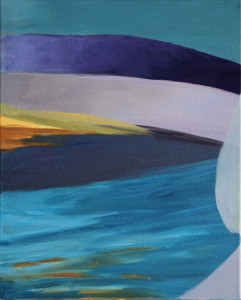 I started with the 3rd or middle panel, which represents the present, and then moved to the 4th and 5th panels – the direction in which I am headed. Last, I did panels #2 and #1, in that order, thinking of the past. Come to the gallery and see them all together. 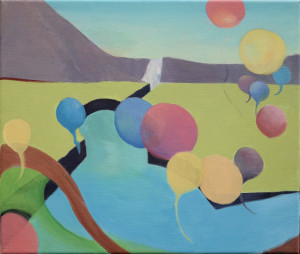 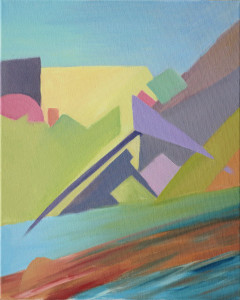 Permanent link to this article: http://ozolins.com/lyric-visions-january-2016-at-soag/