What’s up in January 2017: Cascadilla Gorge Paintings at SOAG 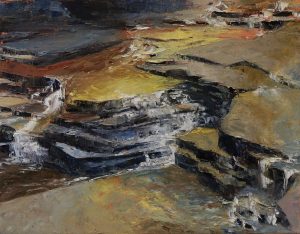 For the month of January, I have 7 new paintings at the State of the Art Gallery in an exhibit called Then and Now. It is in conjunction with the celebration of Tompkins County’s bicentennial taking place this year. This is a group show in two parts – half of the SOAG members are showing now in January, and the other half will show in February. The show runs January 4- 29, with an opening reception January 6, 5-8 pm. 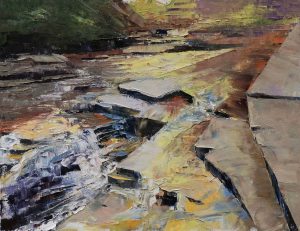 The Cascadilla Gorge trail is a place of incomparable beauty. With a 400 foot rise from Linn Street to Campus, it is also a good cardio workout. Right in the heart of the city, it is easily accessible and forms a daily route between downtown Ithaca and Cornell University for many people. The trail had been closed for six years for repairs and it was a joy to be able to walk there again when it reopened this past spring. I went often, and took hundreds, if not thousands of photos. The Gorge remained endlessly fascinating because the hour of day, the weather, or the changing season each time created a new vista. It is not an easy place to do outdoor landscape painting because, narrow as it is, there is no convenient place to set up an easel without inconveniencing the many people who pass along at all hours. However, this was a drought year and soon I realized with the drop in water flow not only was the beauty of the rock more fully exposed, but there were dry places to step down into the creek bed with plenty of room to set up and paint. Beginning on Sept 12, I proceeded with this series of gorge paintings. The drought similarly exposed some other inaccessible places, and, in Taughannock Creek and Sawmills Creek, I happily painted in the middle of what would have been a rushing stream. 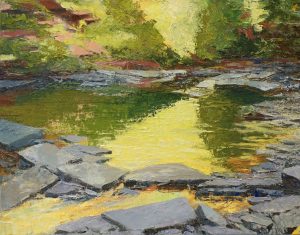 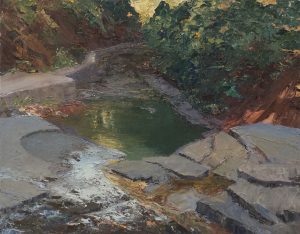 I painted in the morning, from when the light first peeked over the cliff to around noon when the sun was fully overhead and flooded the creek with blinding light. I chatted with tourists from all over the world who wandered by. I observed students in college level ecology classes taking water samples and measuring water flow, and preschool youngsters collecting frogs and water insects. I developed a passing acquaintance with the stone masons who started their work when I came, and were resting their backs and eating lunch when I was leaving eager to see my canvases each day. I was angry and disgusted one Sunday when plastic drink cups rained down and glass beer bottles shattered on the rocks. I had moments of trepidation when the overly dried out walls let go little rock slides, and I had to think very carefully about what was above me so I could paint safely. Unfortunately, my painting season was cut short in early October when Cornell closed the trail for repairs, as overly dried walls were too unstable when the rains came again. All of these paintings were created on site with oil paint on canvas using palette knife. In some of them you can even see bits of windblown organic matter, or small insects. Most of them needed some degree of correction in the studio, such as small adjustments for perspective or light. 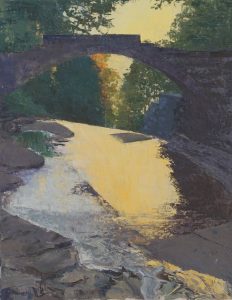 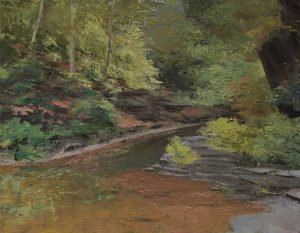 Robert H. Treman donated Cascadilla Gorge to Cornell University in 1909 to support public use, education, and enjoyment. The Cascadilla Gorge Trail system was initially constructed during the Civilian Conservation Corps era. A plan for developing the trail was envisioned in 1915 by Charles N. Lowrie, a landscape architect. He saw great potential for unique scenery with unsurpassed beauty that was at that time unknown to most people because of its inaccessibility among the extremely steep and rugged slopes. Most people could only get a glimpse of the ravine from various bridges that crossed it. His estimate for cost of construction was $21,438. Currently, Cornell Botanical Gardens manages it and is committed to protecting the natural area, providing ongoing educational use, and supporting safe public enjoyment of the gorge. Through the years, the trail suffered erosion and many parts fell into disrepair. Repairs were made in 2009, and in 2011 tropical storm Lee sent devastating torrents and massive boulders crashing down the gorge necessitating extensive rebuilding that cost almost $3 million from Cornell University, Cornell Botanical Gardens, and FEMA. 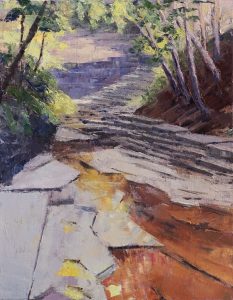 Cascadilla Creek carves through bedrock – shales, siltstone and sandstone – exposing sedimentary rocks that were deposited 400 million years ago. There are ripple marks on the rock surface indicating it once was the muddy shore of a shallow, tropical sea that covered much of New York State. The Appalachian Mountains are the remnants of a mountain chain the size of the Himalayas which was located to the east of this inland sea. Sediments of sand, gravel and mud flowed down the mountain streams, accumulated over millions of years, and formed the sedimentary rocks that we walk on and are surrounded by on the trail. The actions of the massive two mile thick glaciers gouged a series of rivers, from north to south. As the glacier began melting away over 12,000 years ago, the rivers became lakes in deep valleys. Streams that flowed into these lakes plunged as waterfalls over their steep sides and carved the gorges by cutting into the bedrock, action that continues even today.

Permanent link to this article: http://ozolins.com/whats-soag-january-2017/

There will be several paintings in various venues in Ithaca for the month of November. 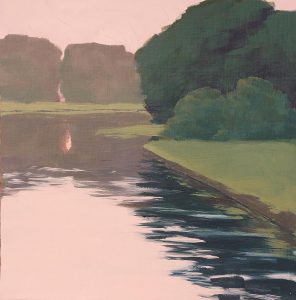 First I will mention my Salon entry for this month at the Sate of the Art Gallery. It is a small landscape from my Sarasota Sunrise series: Sunrise #2 (two red bushes), 12×12″ acrylic  on acrylic paper mounted on foam core and framed. I started this on a rainy morning this past January. As usual, I rose at sunrise, and it was a misty morning, with a slowly rising  fog obscuring much of the near distance. It was a soft, dripping morning. I took a lot of photos, and did some pencil sketches, and then made a hasty retreat into the house when it started raining in earnest. After breakfast, I settled down and painted from memory and sketches. It needed some reflection and revision sessions over the course of the next few months, and voila, here it is, seeing the gallery lights for the first time. This Salon showing is in conjunction with Shirley Hogg’s solo exhibit Waiting for the Ark, large scale, life sized watercolors of endangered animals. The show runs November 2-27, with a reception for the artists November 4, 5:00-8:00 pm. The State of the Art is located at 120 W. Martin Luther King/ W. State Street in Ithaca.

Next, a small landscape in oil, 12×16, Early Summer beyond the Marina, will be hanging in the CSMA gallery space as part of their Fine Arts 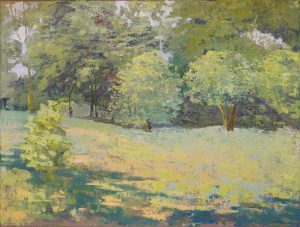 Auction Fundraiser.  Visual art will be exhibited in the gallery throughout November, celebrated with an opening reception on First Friday Gallery Night, November 4, from 5-8 PM. During the 18-day bidding period, works will also be posted on the auction website with a description, photograph, artist bio, and a link to the artist’s website. Silent bidding takes place entirely online. The Community School of Music and Art is located at 330 E State Street.

Last, but not least, If you are visiting the physical therapy offices ofMcCune and Murphy in Trumansburg, you will see two 18×24″ landscape paintings. The first is a group of white ibis, adults and juveniles, in their natural habitat. It is done in acrylic, on stretched canvas, with brush. The second is Mad River, in Vermont, a landscape in oil done with palette knife. It will be there for an undetermined amount of time. 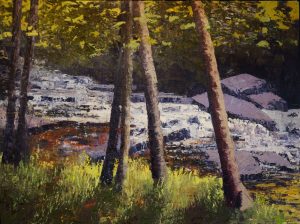 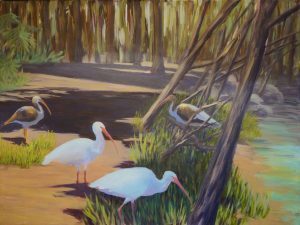 Permanent link to this article: http://ozolins.com/whats-november-2016/

What’s up in September 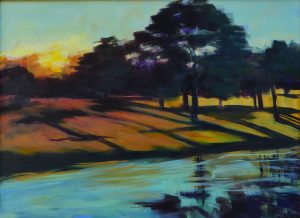 This month I have one new painting on display in the State of the Art Gallery. Sarasota Sunrise #1 is a small, 12×16 landscape done with acrylics. In February 2014 Andrejs and I took a respite from winter, visiting a friend in Sarasota, Florida. It was a delightful location, with a stream and a broad expanse of savanna (a golf course) in back of the condo. I got up at dawn almost every morning and did a painting of the sunrise from the lanai, which is the Gulf Coast term for veranda. I experimented with a different approach to using the acrylics. Using water and retarder, I made them much more fluid than usual, which freed them to flow much more with the brush strokes. Working over many days built up the rich color in these paintings. This is the first of this series to be exhibited. Stand by for more in coming months.

Permanent link to this article: http://ozolins.com/whats-up-in-september/

Here is a video snapshot of the Thru-Lines show at State of the Art for those of you who want a preview or are too far away to come and see it in person. The color is off, in some ways, but it gives a taste of what’s up for August. You can pause to see an individual painting by giggling the space bar key.

Permanent link to this article: http://ozolins.com/thru-lines-visit-video/

August at State of the Art Gallery Ithaca 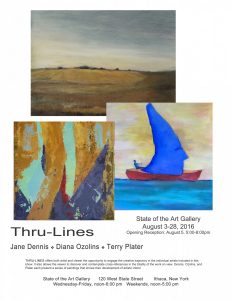 click on image to create large PDF of poster

For writers, a through line (or thru-line) is a connecting theme or plot in a movie, play, or book. It is a constant driving force that can take on a new dimension, shed another, or even make a detour all while maintaining a forward-moving trajectory. Applying this concept to art challenges one to articulate, visualize, and even problematize the driving force—the unwavering given – that defines one’s trajectory as an artist.  Whether explicit at the outset of a career, evident incrementally in the details, or apparent only in hindsight, it is there:  a thru-line defines the philosophical and material integrity of an artist’s work over time.
THRU-LINES at State of the Art Gallery offers both artist and viewer the opportunity to engage the creative trajectory in the individual artists included in this show. It also allows the viewer to discover and contemplate cross-references in the totality of the work on view.
Dennis, Ozolins, and Plater each present a series of paintings which shows their development of artistic intent.

Permanent link to this article: http://ozolins.com/coming-soon-august/