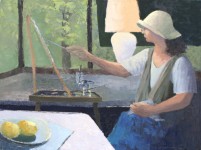 “Yvonne painting at Bill and Jack’s” has been bothering me since I first created it. It has had many revisions, fits and starts. Today it tells me that changing the angle of the table will create a more believable space. What a remarkable change. I’ve known for quite some time that I needed to clean up some smudges on the lampshade and the hat. Taking care of that brightened it considerably, and called for further changes. The table cloth was too bright, needed some receding color. The new sense of rightness of space popped it into a greater sense of reality and called out for the bowl and lemons to be adjusted. Then highlights on the body, brightening the shirt, and fixing the awkward hand. In a nutshell, “I’ll just…“ turned into a complete overhaul. I think it is spectacular now. I am very pleased with it and my day of painting.

After lunch I got to some revisions on the huge firs in the Tualatin landscape. That has been bothering me for a year. Again, it took a long time to think about what needed to be done. First, changing the bright yellow in the sky to a more believable blue, then the leaves on the trees needed to be compensated to punch up the brightness with the yellow gone. The path next needed to be lightened, made more complex, and graded from close to far. In the process, the amount and quality of light pouring across it needed to be adjusted. Once again, it was a rolling cascade of changes – one thing called out for another as the relationships between areas shifted. Was much pleased with it afterwards.

Permanent link to this article: http://ozolins.com/getting-started-again-day-3/ 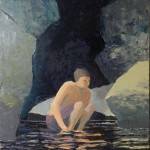 A successful day of painting does not break a large enough hole in the ice to keep it from closing up again the next day. Same fear of the painting. Not enough time to muck about and fail and still have time to continue and succeed. Needed another muck-about-painting, so I chose John Paul in the water. It was fun to unify and simplify the rocks, create a better composition. This is another painting that has been sitting for years, but I yearn to complete it. The vulnerability of this little boy in the water, all alone, in front of the huge rocks that form a menacing cavern. Would be nice to have all of that psychological drama in addition to the spectacular color of warm, hot skin on a bright day reflecting in the water, and contrasting with the cool blues and grays. No reference photo! What a disadvantage.

Permanent link to this article: http://ozolins.com/getting-started-again-day-2/

First day of freedom to paint. But, how to start, blocked energy – first the fear that I don’t know how to paint anymore. Second the choosing of what to paint – so many unfinished paintings already in the studio, so many ideas that were stopped by other pressing matters in their inception. Third – the unwanted, traitorous thought – do I still want to paint, have I fallen out of love with painting?

The tried and true ice breaker – find an old unfinished canvas or a yucky failed painting and just start mucking about. No judgement, no anticipation of success or failure, just muck about with paint. 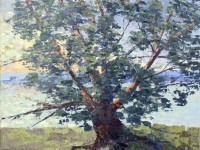 I pulled out a painting of willow tree at sunset just before a serious thunderstorm on the St. Lawrence. It is an image that arrested me with its drama, and the strong design elements for composition. On that day, sunset was underway, and I realized I had limited time; also, within minutes, it was clear that a violent thunderstorm was quickly moving into the area. I worked fast, establishing the bones of the composition with the first strokes, getting the color themes down over as much area as I dared, and then packed up quickly with terror as the storm broke around me. Although it was no way near finished – just barely started, I never could relegate it to the scrap heap of canvases to be painted over. It has hung on the works in progress wall for about two years.

This would be my material for a “mucking about” canvas. Laying down the rest of the tree trunk, the grass and gravel of the foreground covered the blank parts of the canvas. Then I could start to adjust the colors, and work over the rest of the canvas. Because it was such a vivid image, and such an emotion packed evening when I started it, I retained a very strong visual memory of the tree and river behind it. I Mucked about with the sky and water. It was becoming not just a warm up exercise, but a successful painting. I consulted some photo reference material for the branches and the leaves. No photo from that evening was a perfect match for what I was painting, but it was enough to verify that my tree was willow like enough to give me confidence to continue. Fantastic little image, very exciting!

That little painting revved up my engines. After a snack, I went back down to the studio, and made a third pass on the huge landscape Tully Dawn. Started one morning at least three years ago, and abandoned because of the complexity of dawn colors and atmospheric perspective, subtlety of gradations of color from foreground to far, far distance, and magnitude of large canvas. This is truly a monumental and daunting task it needed a lot of courage and a good warm up to return to it.

Permanent link to this article: http://ozolins.com/three-days-in-the-life-of-a-painter-getting-started-again/